The DS1921H Thermochron iButton is a rugged, self-sufficient system that measures temperature and records the result in a protected memory section. The recording is done at a user-defined rate, both as a direct storage of temperature values as well as in the form of a histogram. Up to 2048 temperature values taken at equidistant intervals ranging from 1 to 255 minutes can be stored. The histogram provides 64 data bins with a resolution of 0.5°C. If the temperature leaves a user-programmable range, the DS1921H will also record when this happened, for how long the temperature stayed outside the permitted range, and if the temperature was too high or too low. Additional 512 bytes of read/write NV memory allow storing information pertaining to the object to which the DS1921H is associated.

Data is transferred serially via the 1-Wire protocol, which requires only a single data lead and a ground return. Every DS1921H is factory-lasered with a guaranteed unique electrically readable 64-bit registration number that allows for absolute traceability. The durable stainless steel package is highly resistant to environmental hazards such as dirt, moisture, and shock. Accessories permit the DS1921H to be mounted on almost any object, including containers, pallets, and bags.

The DS1921H is intended for monitoring the body temperature of humans and animals and for monitoring temperature critical processes such as curing, powder coating, and painting. Alternatively, the DS1921H can be used for monitoring the temperature of clean rooms, and computer and equipment rooms. It can also aid in calculating the proportional share of heating cost of each party in buildings with central heating. The DS1921H has a fixed range of +15°C to +46°C. The high resolution makes the DS1921H suitable for scientific research and development. The read/write NV memory can store information such as shipping manifests, dates of manufacture, or other relevant data written as ASCII or encrypted files.

Note that the initial sealing level of DS1921H achieves the equivalent of IP56. Aging and use conditions can degrade the integrity of the seal over time, so for applications with significant exposure to liquids, sprays, or other similar environments, it is recommended to place the Thermochron in the DS9107 iButton capsule. 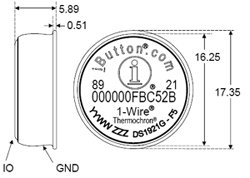